Two Legends Together As One Band 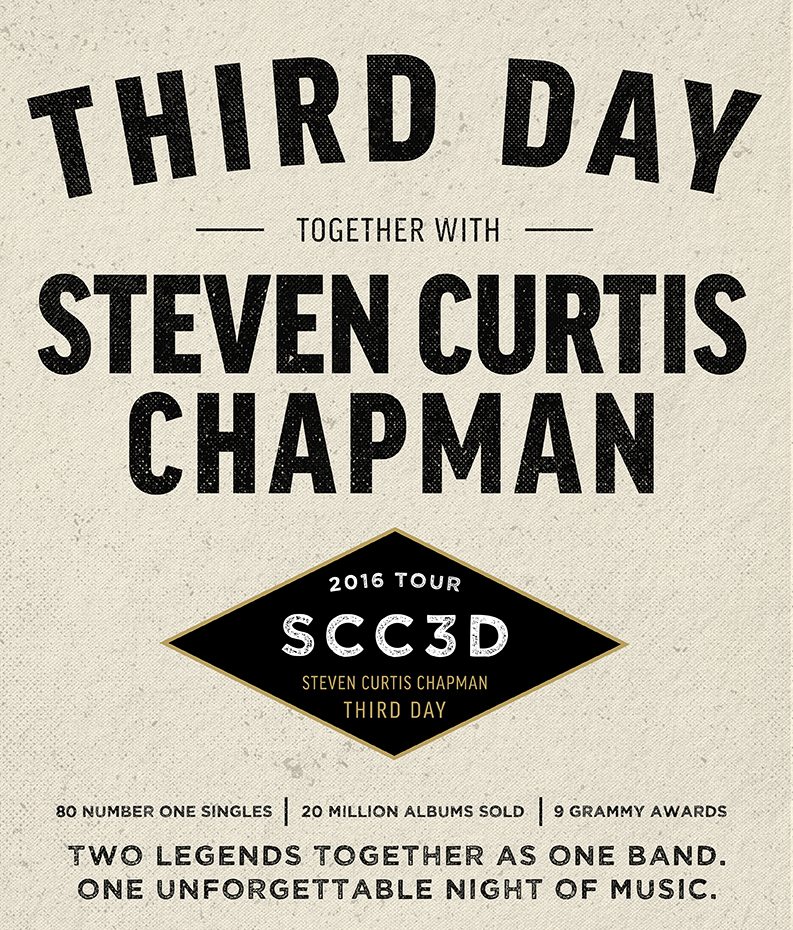 Conway, AR. (1/28/16) – The landscape of live entertainment is ever evolving. The traditional structure of a few up and coming opening acts followed by a set from the headliner has been a great touring model for many years, but leaves some artists and fans wanting more. In fact, both STEVEN CURTIS CHAPMAN and THIRD DAY have wondered… “What can we do to give the Christian music fan more?” And the answer to this question is the beginning of what is going to be a new day in live Christian entertainment.

Awakening Events is proud to announce THIRD DAY together with STEVEN CURTIS CHAPMAN presented by Food For The Hungry. This multi-city tour will begin on April 14 in Little Rock, AR and make stops in multiple cities along the way, including Memphis, Atlanta, Dallas, and Indianapolis before wrapping up on May 7.

This will be the most unique tour experience ever for the Christian music industry, with the talents and artistry of two Christian music icons woven together to create a truly unforgettable evening. THIRD DAY & STEVEN CURTIS CHAPMAN sharing the stage together as one group, performing songs together from their two amazing catalogs of music that have garnered critical acclaim as well as built a following of millions worldwide. “I can’t tell you all how excited I am to be a part of a “first time ever” tour experience with my buds from Third Day! Something we’ve been dreaming and talking about for years is finally happening…Third Day as my band and me as a member of Third Day…a true “come together” experience for both of us! It’s gonna be a very special night for us and for the audience that gets to experience it with us.”

“We have never done a tour together. We have done shows together in the past, but this will be the first time that we are actually on a full tour together. But the thing that I’m most excited about for this tour is I don’t think anything like this has been done in the Christian marketplace where a solo artist and band got together and were onstage the whole time together playing each other’s songs… that is what is so intriguing and attractive about this whole thing is that it hasn’t been done before.”

“When we first stated talking about us doing a tour together my first reaction was WOW this is going to be fun. We’re all going to be up there together on stage having fun, and I think that’s going to translate directly to the fans and they are going to have a blast! “

“It is going to be such a natural fit musically, and I’m excited to see how people respond. One of the things that is super important for any artist is to not only give the fans what they want, but also to have a great time being up there yourself… and this is going to be such a blast to be onstage. It is also going to be so exciting to see how the night will shape up with the set list, and for us to have Steven in the mix to have fresh vision for some of the songs that we love and have been playing for years.”

Awakening Events produces over 120 Contemporary Christian concerts and events nationwide in America and is consistently ranked in Pollstar’s “Worldwide – Top 50 Promoter” list each year. Currently in 2015, Awakening Events is ranked as the 19th largest promoter in North America. Awakening Events is based on Conway, Arkansas is dedicated to all aspects of live Contemporary Christian music touring, including but not limited to, planning, logistics, creative, marketing and helping create the ultimate fan experience. For more info visit: www.AwakeningEvents.com

About Food For The Hungry:

Food For The Hungry seeks to end ALL forms of human poverty by going into the
hard places and closely walking with the world’s most vulnerable people. Our view of
poverty is holistic and complex. Our solutions are innovative and community specific.
We courageously seek out the overlooked and advocate for the underserved.  We’re unrelenting and we do what others claim can’t be done. Through community-owned transformation we empower children, families and communities to invest in their own development. More than anything, we want to see people thrive. We are agents of change. We work, we feed, we teach, we love, but we know when it’s time to leave.

We are ending poverty, together. Visit www.fh.org

*Dates subject to change, to confirm most up to date information please visit www.awakeningevents.com