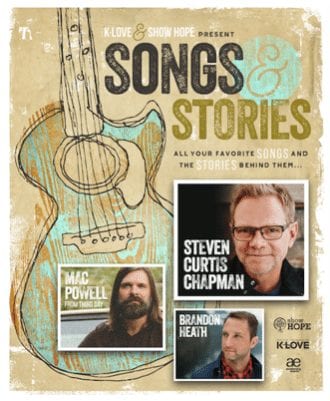 STEVEN CURTIS CHAPMAN WILL KICK OFF HIS THIRD “SONGS & STORIES” TOUR THIS FALL, WILL BE JOINED BY MAC POWELL AND BRANDON HEATH;

(Nashville, Tenn) – 13 July 2016 – It was five years ago when Steven Curtis Chapman debuted his “Songs & Stories” Tour, which became one of his most successful tours ever with sold-out crowds across the country. This fall, he will take the anticipated show back on out the road for its third run and will be joined by Mac Powell from THIRD DAY and Brandon Heath. The 20-city “Songs & Stories” 2016 tour, presented by Show Hope and for the first time by K-LOVE and in partnership with Awakening Events, will kick off on September 15 in Philadelphia and wrap October 16 in Jacksonville, FL.

Each evening of the tour, Chapman, Powell and Heath will perform some of their favorite songs, along with fan favorites, in a unique songwriting atmosphere. They will also share many of the powerful stories that have come as a result of these songs.

Mac Powell shares, “I can’t tell you how excited I am to be on the stories and songs tour. I get to share more insight into some of my songs in a way they haven’t been shared before. Secondly, to be able to share the stage once again with two of my favorite singer/songwriter’s in the business – Brandon Heath and Steven Curtis Chapman – will be amazing. You may have seen us in concert before, but never like this!”

“I’m excited to share the stage with two of my music heroes,” exclaims Brandon Heath. “I’ve gotta really up my game on the Stories and Songs tour – these guys have major songwriting muscle and I’m the grunt of the bunch.”

The most updated tour information can be found at StevenCurtisChapman.com and KLOVE.com/events.