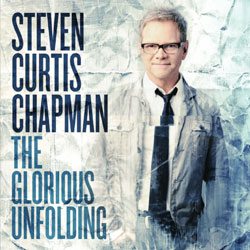 New single “Love Take Me Over” garners 42 radio adds first week.
“The Glorious Unfolding” 35 – City Fall Tour announced;
Show Hope presents tour to feature Steven Curtis Chapman, Laura Story and Jason Gray
Nashville, Tenn. (August 6, 2013) – Highly acclaimed singer-songwriter Steven Curtis Chapman announces the release of his latest record,The Glorious Unfolding, available September 30, 2013. The project is the first full-length studio album with all original songs in seven years. Kicking off the launch, the new single, “Love Take Me Over,” recently released and garnered 42 radio adds its first week out. Chapman will also visit 35+ cities on the first leg of “The Glorious Unfolding” Tour alongside GRAMMY-winning worship leader Laura Story and greatly noted songsmith Jason Gray.
Garnering 47 No. 1 singles and approaching 11 million career albums sold, Steven Curtis Chapman is now readying to release his 18th album. The Glorious Unfolding centers on the truth that God is at work telling a story through the wonderful and amazing as well as the painful and difficult chapters of our lives, something Chapman understands first hand.
“As I’ve journeyed through this story, I’m more convinced than ever that God does know the plans that He has for us and He will finish what He started. God is telling an amazing, glorious, epic story. We have to decide if we will trust Him with it,” explains Chapman.
The latest single, “Love Take Me Over,” recently released to radio and garnered 42 adds its first week out on rotation, making it one of Christian music’s highest radio add dates of 2013. Other notable songs from the record include the melodically adventuresome “Glorious Unfolding,” high-energy declaration “Something Beautiful,” full-orchestrated love song “Together” and
many others.
Chapman will embark on a fall 35-city, “The Glorious Unfolding” Tour. The national run’s title presenting partner is Show Hope, a nonprofit organization that restores the hope of families to orphans in distress around the world and in the U.S. Chapman and the tour are also partnering with America World Adoption. Fans can anticipate music from the Steven’s new album, including the debut single, “Love Take Me Over,” a mixture of his No. 1 singles and other fan favorites in an encouraging night filled with stories, worship and excitement.
“I’m so excited and honored to have Laura Story and Jason Gray join me on the road,” Chapman adds. “I can’t wait to share these songs live and we’re already praying God will use each and every night powerfully. I hope all our friends can make it out.”