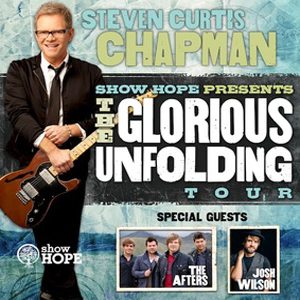 “Love Take Me Over” already at No. 3 on Christian radio

Chapman currently on the road with Casting Crowns, Natalie Grant, Matthew West and more for “The Story Tour”
Chapman to appear on Fox & Friends and
700 Club this December

Nashville, Tenn. (December 3, 2013) – Five-time GRAMMY® winner and highly acclaimed singer-songwriter Steven Curtis Chapman has wrapped his hectic and successful “The Glorious Unfolding Tour.” With special guests Laura Story and Jason Gray, Chapman sold out 17 shows on the coast-to-coast run in support of his new album, The Glorious Unfolding, which released earlier this year.

“Steven is a timeless professional with an incredible heart on and off stage. ‘The Glorious Unfolding Tour’ was one of the best tours of the year,” said Mike Alley, Director of 48Live Productions.

“‘The Glorious Unfolding Tour’ fall leg has been an incredible experience! I’m so grateful for Laura, Jason, my band and crew and everyone who came out to see us,” said Steven Curtis Chapman. “I’m so honored to still be getting to do this and I look forward to hitting the road again for the spring run with my great friends in February.” Chapman will launch a 2014 edition of “The Glorious Unfolding Tour” in February featuring special guests Josh Wilson and The Afters.

“If you’re a fan of anyone on the roster, The Glorious Unfolding Tour is a show you won’t want to let pass you by,” said Jesus Freak Hideout. “Steven is still going strong musically and as a performer decades after getting his start, and the mix of new and classic SCC tunes in the same setting is just proof of it.” 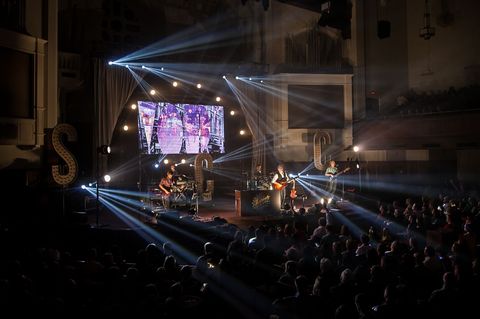 The success of the fall leg of the tour is equaled by the chart performance for Chapman’s lead single “Love Take Me Over.” The track is shooting up the charts, already reaching No. 4 on the Billboard Christian Songs chart and No. 3 on the Christian AC Indicator and Christian AC Monitored charts. Broadcasting to an audience of nearly 8 million, the song garnered 43 radio adds in its first week, one of the biggest debuts in Christian radio this year.

With a career that boasts 47 No. 1 singles and 11 million career albums sold, The Glorious Unfolding mark Chapman’s first all new studio record in over seven years. Hailed as a “landmark achievement and a career-defining record” by NewReleaseTuesday.com, the album received an impressive amount of acclaim and represents an important shift of mood in Chapman’s life and music.

Wrapping up the year, Chapman will appear on CBN’s 700 Club on December 13 and the highly-rated talk show Fox & Friends on December 15 to perform some of his cherished holiday hits and new songs from The Glorious Unfolding.